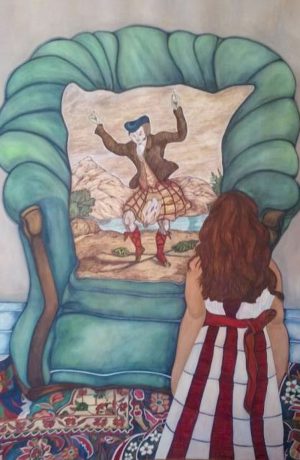 When I was four, I visited my grandparents often. They lived in a stilted house in City Terrace, newly built in the late 50s, its interior adorned with fascinating furniture and knick knacks: an owl music box, antique lamps with moving images, dolls with doilies. Amid the cornucopia, leaning on a plush green velvet Queen Anne sofa, rested a pillow, directly at eye-level, intricately stitched with a depiction of a Scottish celebrant dressed in kilt and short brown jacket, perhaps doing a jig, his arms up, right foot on tip-toe, the left firmly planted, kilt flowing, a green beret perched on his head, eyebrows raised and turned in towards his nose, a grin bordering on madness. It startled me immediately. It was the antithesis of everything the house represented, the good, the wonder, the fun, the joy, and the innocence. Perhaps it was a reminder of the stark reality of life. My mother and grandparents would tell me to sit down, Sit down they would say. But I couldn’t, nor could I explain the danger lurking in the pillow. I tried to articulate my fear, pointing to the sinister object, my eyes wide, shaking my head, trying to warn them of the threat the Scott posed to everyone, but all that came out was, “But the little man, he go like that.” Hence the eponymous painting.