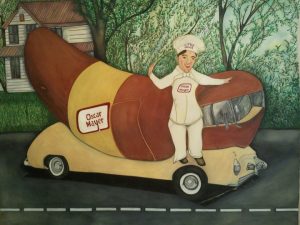 My family shopped under a desert sun in the Thousand Oaks shopping center of the 1950s. We would park our green and white 57 Chevy in the baked lot. This particular time, there was a car fitted with an oversized frankfurter as its passenger cab resting under some trees. It was the Oscar Meyer Weiner Mobile, and its driver was what I believed to be a boy in a chef’s suit and hat. As I watched him perched on the side of his car, he suddenly jumped down and ambled towards me. It was then I realized that it wasn’t a boy but a man. Not only was the car a hot dog, but the man was the size of a child! As a five year old, I was paralyzed in my amazement, staring as the little man in white approached, fully aware he was my height. I could see directly into his smiling brown eyes. He opened my hand and placed an object in it. It was a whistle in the shape of a frankfurter. He turned, hopped back onto his mobile, and drove away. I don’t know what happened to the whistle, but I remember it to this day.