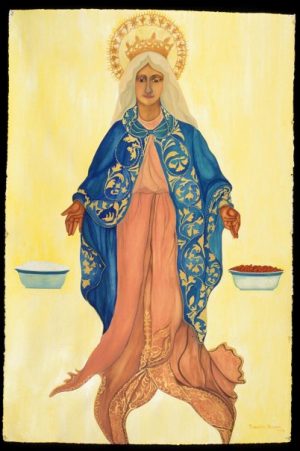 My mother was born in the mountains of San Sebastian, deep in Western Puerto Rico, a town inhabited not just by generations of families but also by spirits and gods and saints, legends and stories kept alive by folklore of long ago. She was the sole ward of my grandparents Cheba and Abuelito, spoiled and demanding, so much so that one day Cheba warned her that if she continued acting bad, one of those legends, the Virgen, would appear from the sky asking for rice and beans, the presumed penalty for not having the food being death. Mother dismissed the threat as ramblings of an old person. Then one day, my mother violated every rule Cheba gave her, including never talking back to your elders. Suddenly, the room became eerily still. She sensed an apparition before her, and floating from the ethers came the Virgen, preparing to ask for rice and beans, which my mother didn’t have. She began crying, her imagined death imminent, begging for forgiveness, while Cheba smiled.